If I told you I wasn’t a spaz, you would say “Do you like to swim in large rivers located in east Africa? Cause you’re in de-nial!” (get it, “the nile”). Ohh that joke never gets old. I think the simplest way for me to describe myself is to offer some designations others have branded me with over the years. The few I have selected are: cultural-less child, California roll and hippie.

Ali the Cultural-less child= My parents (who have been involved in the Japanese American community since I’ve known ‘em) could not figure out how to get me interested in learning about my Japanese culture. I was a proactive teen involved in sports, student leadership, Marin County Youth Commission- but shied away when it came to Asian American or Japanese American related programs. Then, after my first attempt to make rice resulted in a broken cooker and small fire, I was finally dubbed the “cultural-less child”. To this day the name and story have stuck, perpetuated by my bully of a boss, Paul Osaki. 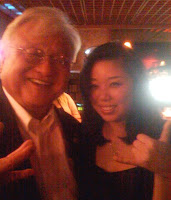 Ali the California Roll= Moved to Hawaii for college and suffered a major identity crisis. Walking to class was like going through the mirror fun house at the county fair- everywhere I looked I saw reflections of myself in different sizes. Outwardly I looked like the majority, but inwardly I felt like a cultural minority. But it was in Hawaii where I met a diverse group of friends and learned more about my own culture. They (and even my hakujin friends) would call me things like “banana” and “twinkie” (yellow on the outside, white on the inside) but eventually I graduated to the name “California roll” (a JA girl with cali roots).

Ali the Hippie= Im not really a “hippie” in the conventional sense, but I guess in contrast to my brother’s standards of living I could be. Kenso has been calling me “hippie” ever since visiting me in Hawaii during my college years (that’s when he met my shaggy-haired bf corey, rode public transit the first time, learned I had turned vegetarian and found that I preferred kayaking over shopping). “You and I lead very different lives,” my brother sighed discontentedly after realizing I didn’t have cable. After growing up in a home where gifts = love (= me being a spoiled brat) it is refreshing for me to now realize that the things that matter most in my life aren’t things at all, but people and life experiences.

Now that I’m a little older, a bit wiser, and a lot poorer I know more clearly what kind of person I want to be, and that person is: a nakayoshi young professional! (that was intended as a joke but i do truly enjoy being in the group). Thanks for skiming, see you at the bar crawl!

This site uses Akismet to reduce spam. Learn how your comment data is processed.